This summer has been hot in more ways than one here in Bend and Eugene, and it’s not over yet with a heat wave hitting Central Oregon and the Willamette Valley the first and second weeks of September. Likewise, the wave of buyers hitting both markets hasn’t slowed down quite yet.

Although COVID-19 cases in Deschutes and Lane County haven’t spiked the way they have in many other parts of the country, the virus hasn’t gone away yet either. Still, the numbers point to more and more sellers finally feeling comfortable putting their homes on the market.

That hasn’t been enough, though, to make up for the severe deficit of inventory that we saw heading into the summer. As far as buyer activity, Bend and Eugene’s markets both remained plenty hot through August. Let’s take a look at the numbers. 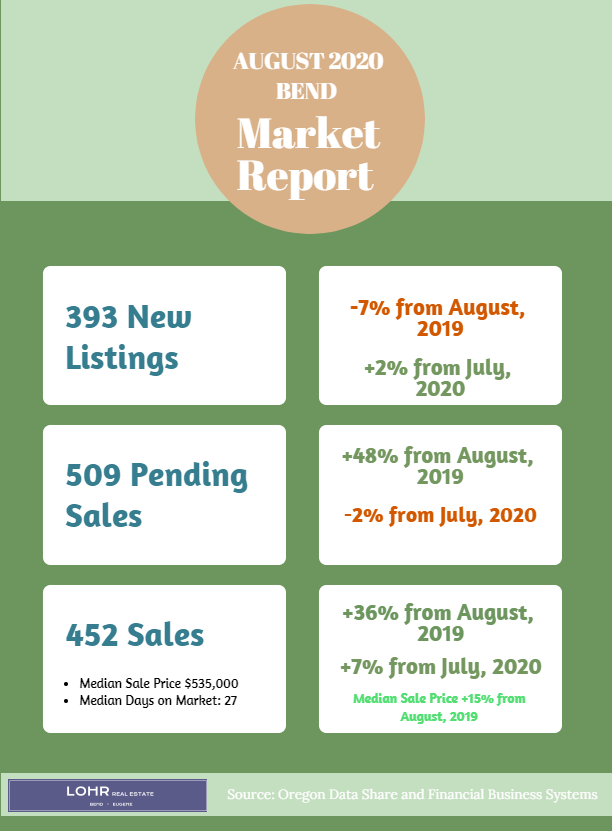 There isn’t much new to report here when we look at August’s numbers  compared to July’s. While buyer activity remained extremely vigorous in Bend, the market also didn’t tighten any further than it has already, which is positive news for buyers. While August’s median sale price of $535,000 represents a 15% year-over-year increase, it isn’t any higher than July’s median of $534,950.

In other words, prices in Bend may have finally reached their ceiling for the time being. We expect sale prices to drop slightly heading into the fall, with a little bit more inventory accumulating before the winter months put a lid on both buyer and seller activity.

Coming back to the present, total inventory of residential properties at the end of August stood at just 46% of what it was a year earlier. It is hard to find a home in Bend right now, with inventory deficits at most every price point, though most notably in the $300-450k and $500-700k ranges. Slightly less homes are going on the market at these price points than did a year ago, while significantly more homes are selling.

Homes in Bend are taking longer to sell in 2020, spending a median of 26 days on the market compared to 16 in August of 2019. The vast majority are eventually selling, however, as many buyers adjust their expectations, having come to terms with the unsavory reality of a strong seller’s market. 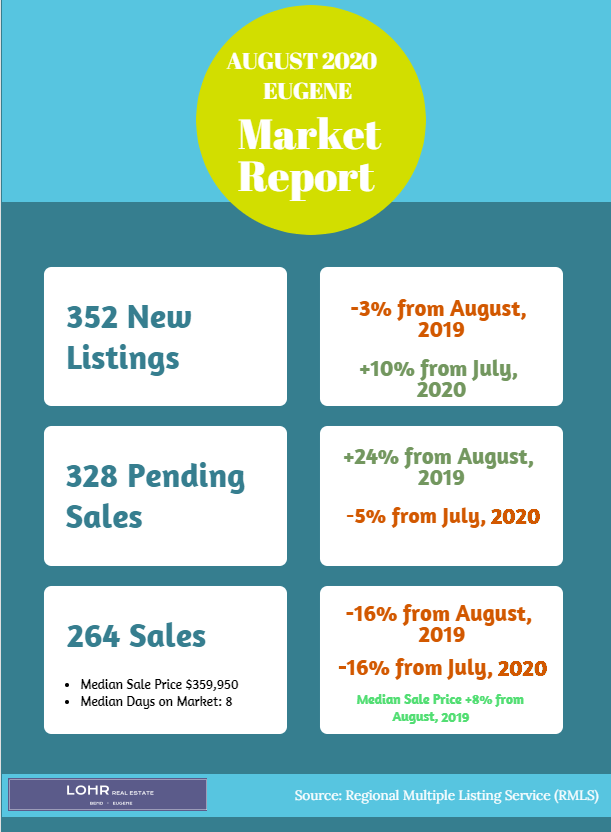 While pending sales were down slightly from the previous month, buyer activity in Eugene is still about 25% higher overall than what we saw the previous summer. New listings are actually up slightly at many price points, but at the same time, buyer activity is significantly higher. That’s most noticeable in the middle to upper end of Eugene’s market. In the $450-600k range, pending sales through the entire summer are up 73% year-over-year, while in the $600-800k range, they’re up 108%.