The numbers for August 2021 are in, and they paint a clear picture. Bend’s market is finally getting less frenzied, with prices dropping some amount from the record highs we saw just a month ago. On the other side of the mountains in Eugene, things are just about as tight as ever but prices are staying flat rather than jumping up.

If you’ve recently bought a home pretty much anywhere, it’s natural to worry that you “bought at the top.” Conversely, if you’ve been on the fence about selling your home, you might be wondering if you’ve lost your window of opportunity.

But the changes we’re seeing in Bend and Eugene are incremental rather than drastic. Inventory is still really tight. Activity will cool heading into the colder months, as it usually does. But there aren’t any realistic scenarios where surplus inventory clogs either market heading into the spring and summer buying season next year.

Timing is everything, but so much depends on your situation. There are many more factors than we can go into here, so reach out to us any time and we’ll help you get your bearings. In the meanwhile, we’ll continue to keep a close eye on our local markets and keep you informed.

In August, the median sale price for all residential properties in Bend dropped from $675,000 to $632,000. A 6% month-to-month drop seems drastic, but we fully expect prices to stabilize around this point heading into the fall.

Listings were down 7% month-over-month while pending sales were actually up slightly. That’s a recipe for inventory to drop slightly the next month. We expect that trend to continue as sellers avoid listing during the colder months and buyers who missed out in the summer compete to grab up what does hit the market.

In other words, buyers and sellers should expect more of the same in the next chunk of time. List prices still trended upward in August, but sellers may need to be somewhat less aggressive heading into the fall. 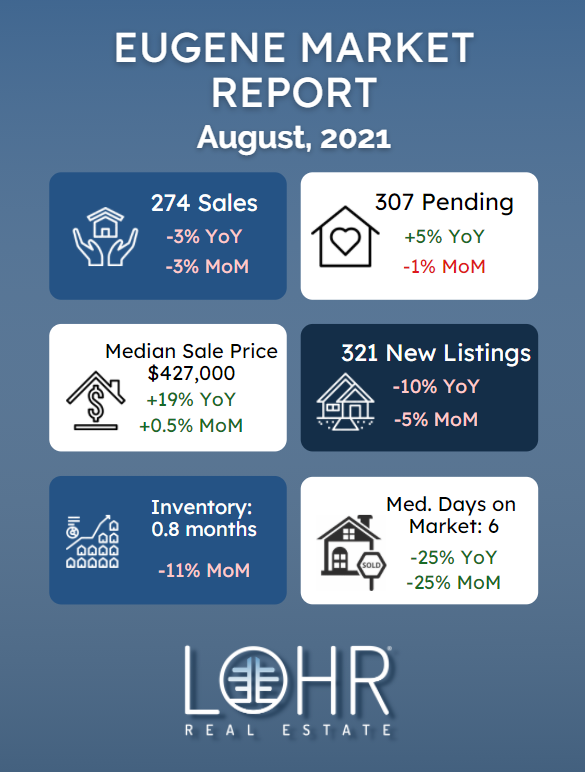 In August, new listings were down 5% month-over-month while pending sales rose 5%. Inventory is dropping again, and homes went off the market 25% quicker than they did the previous month. But prices are mostly staying flat, hitting a median of $427,000 in August.

That’s lower than the record high of $440,000 set several months ago. List prices rose 3.4% month-over-month in August, but homes sold for 2.3% over list on average, compared to 4.2% in July. In other words, while sellers have gotten more aggressive, buyers are starting to hold back, even though there are just as many of them.

Eugene’s market is tightest though at the $350k-450k price point, with inventory at just 0.6 months. Competition will remain stiff heading into the fall, but buyers at higher price points may find some relief compared to what we’ve seen in the spring and summer.