People from all across the United States are moving to Oregon. In fact, Oregon has more people moving in compared to the number of people moving out than any other state in the country.

Among all the possible destinations in Oregon, it’s not hard to see why people are moving to Eugene. Eugene consistently ranks as one of the best places to live in Oregon and one of best small cities in the United States.

Thinking of moving to Oregon, or better yet, Eugene? Needless to say, before you start looking for real estate in Eugene, you’ll want to come pay a visit. But maybe you haven’t had a chance yet.

Well, we’re here to help: join us as we take a tour of what makes Eugene, Oregon special.

Maybe you know plenty about Eugene and are already set on moving–congratulations! We suggest you check out our Beginner’s Guide to Eugene: 5 Steps to a Successful Relocation. If you’re relocating from California, you might also want to read our Guide to Moving to Oregon from California.

Something in the Air: One of Oregon’s Best Cities for Outdoor Lovers

Let’s start with a fairly banal observation: there’s something about the air here.

If you’re thinking of moving to Eugene and decide to pay a visit, that’s the first thing you might notice when you step off the plane. You can pretty much smell the green–appropriate, considering that Eugene is known as the “Emerald City.”

Riding into town and glancing around at the streets, neighborhoods, and surrounding valley, you’ll certainly see a lot of green. When I was a student at the University of Oregon, my friends from large cities in East Asia would actually remark: Eugene isn’t a city, it’s a forest!

Climb to the top of one of Eugene’s two main overlooks, Skinner’s Butte and Spencer’s Butte, and what you’ll see is a lot of trees with a few low-rises interspersed. (We’ve featured the view from Skinner’s Butte above.)

The vista may lack somewhat in glamour, but this forest green runs through the blood of Eugene’s residents. For Oregon Duck fans (they’re not too hard to find here), throw some bright yellow in there too.

But let’s get back to the air: it’s not just a particular smell, it’s a whole atmosphere. Even if the other green that you’ll find in the air here–Oregon’s legal recreational cannabis–is of zero interest, you may find that just being in Eugene kind of mellows you out.

After you’ve taken in your surroundings, it won’t be long before you notice something else remarkable: nobody seems to be in too big of a hurry.

Take the traffic, for instance. If you need to switch lanes in a hurry, by and large people will let you merge. Wait a few seconds too long at a green light, and people don’t blare their horns. Wait really long, and maybe you’ll get a gentle tap.

Mind you, this is still a city: stuff is going on. You’ll meet plenty of passionate people here. Missing, though, are the edgy speed of the East Coast, the sun-baked vibe of SoCal and its artificial suburban paradise, and the insular quality of the Bay Area.

We mean no offense to residents of these other fine locales: naturally, we’re biased. Most people who live here are. And they wouldn’t want to live anywhere else. Moving to Eugene from California or from other states, you may soon find yourself singing a similar tune.

Probably, you already have some sense that things are a bit, well, different in the Pacific Northwest. Many people move to Oregon for its unique culture and way of life. And Eugene is one of the best places in Oregon to find about the Oregon vibe is all about.

Maybe you’ve seen the show Portlandia. In some ways, Eugene is Portland’s cool but kind of shy younger sister. She marches to a different beat, but she’s not an exhibitionist like her older brother.

Get to know her though, and she’s super friendly and unpretentious. At heart, she’s down to earth but kind of deep, and she really cares. She’ll go to a political rally, plant an organic garden, or volunteer at a school. Yet she’s also not afraid to let loose and have a beer or maybe even go to a football game. (People do relocate to Eugene from Portland for these and other reasons.)

This image is a generalization, of course. To really get to know Eugene, you have to spend some quality time here. We’ll offer just a few suggestions. 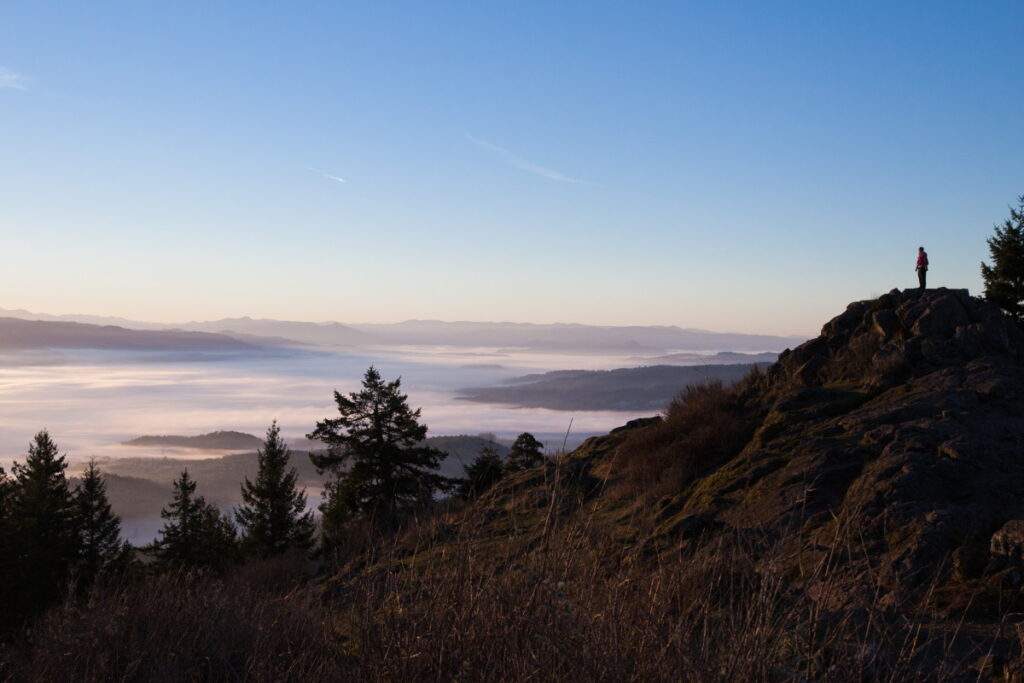 Things to See and Do Before You Move to Eugene

Like we mentioned, if you’re looking to move to Oregon, then you’ll want to come here first. We recommend you see firsthand why Eugene lives up to its reputation as one of the best places to live in Oregon. Get out there and explore.

So, where to begin? We have just a few suggestions for things to do in Eugene. Well, more than a few.

Tour local wineries, or go to one of the area’s many organic farms. Hit up the Saturday Market, or even better, the annual Oregon Country Fair. Join a block party–the Whiteaker Block Party is the biggest. Go to a local microbrewery, or maybe attend a bluegrass or gypsy folk show at Sam Bond’s Garage. Eat dinner at Grit or Rye and discover the joys of Pacific Northwest cuisine and its locally-sourced, farm-to-table ethos.

And don’t forget to explore the surrounding area. Just an hour to the west, you’ll reach the majestic Oregon coast, with its towering cliffs, majestic lighthouses, expansive, completely public beaches, and noisy but somehow endearing sea lions. An hour to the east, you’ll enter verdant rainforest before coming to the foot of the Oregon Cascades and some of the most majestic mountain scenery you’ll find anywhere.

It’s a lot to pack into a single visit. But once you’ve tried a sampler platter, if you decide to make the move to Eugene, Oregon, you can enjoy the full-course meal and more.

The Practical Stuff: Finding a Job in Eugene and a Place to Live

To be fair, you’ll probably want to find a job before you take the plunge. There’s good news in that arena: Oregon’s economy, Eugene included, is thriving. Wallethub recently ranked Oregon’s economy 8th in the nation.

Lane County, meanwhile, has added new jobs for seven years and counting, one of the country’s most sustained economic expansions. (Most of Lane County’s residents live in Eugene.)

Education and healthcare are the largest fields, while technology is a growing presence. Go to the Silicon Shire homepage for a convenient guide to Eugene’s tech companies. There’s a lot of them.

Eugene’s neighborhoods are close-knit, with a high value on fostering a sense of community. Want to know where in Eugene to look for a home? As Eugene realtors, we’ve toured them all inside and out, and we’re happy to share our findings: here’s our list of Eugene’s 5 Best Neighborhoods.

They’re also eclectic, particularly in South Eugene, a popular choice for parents looking to expose their kids to progressive values. South Eugene High School, sometimes referred to affectionately as the “University of South Eugene,” is one of the state’s top public schools and certainly one of its most outside-the-box.

What You Need to Know about Eugene Real Estate

We think you’ve heard enough of the “Why” when it comes to relocating to Eugene. Now, it’s time to get more into the nitty-gritty of the “How.”

The thing is, other people are in on the no-longer-so-secret charms of the Emerald Valley. The number of people moving to Oregon as a whole continues to swell. As of May 2019, Oregon is the country’s number 6 relocation destination.

As a result, the Oregon real estate market is soaring to heights unheard of in previous decades. There have been some indications that it has soared too high: recent signals point to a flattening-out in Portland and its surrounding suburbs. On the other hand, 2020’s rock bottom interest rates have created unprecedented buyer demand, causing prices to soar.

Eugene’s housing market has certainly weathered the storms. We wrote an article recently about why Eugene’s market isn’t heading for a housing bubble or even a slowdown necessarily. Prices continue to increase significantly from year to year, and especially at the lower end of the market, there are fewer and fewer available homes.

That should be of some concern to most first time home buyers. Eugene recently ranked as America’s second most constrained housing market, trailing only Seattle. It’s crazy but true.

What that means, basically, is low housing inventory. Like, stupendously low inventory: the most recent figures from
December 2020 show an inventory of only 0.7 months.

That will increase through the Spring as more homes hit the market, but we can expect inventory to hover around 1 month through 2021. For the latest picture of Eugene’s market, check out out our 2020 Third Quarter Market Report.

If you want to get a piece of this pie, you’re going to need some help on the ground. Particularly in desirable neighborhoods, homes often go pending in a matter of days and for prices well above what’s listed.

We’ve outlined the struggles would-be Eugene homeowners have to face in another article: Tips for Home Buyers in a Tight Real Estate Market. Simply put, it’s a sellers’ market here, and you’re going to need an agent who is willing to knock on doors and create opportunities for you.

We just happen to be the kind of agents who will do just that. Check out our Why Work With Us page for the lowdown on what we do and how we like to do it. Contact our Eugene office and we’ll get started on your home search right away, or search for Eugene homes for sale from the comfort of our website.

If you’re still on the fence about whether the Eugene life is the right life for you, then don’t be shy. You can delve further into the Eugene area’s many offerings and learn more about the Eugene real estate market on our Eugene Blog.

22 thoughts on “Why People Across the Country are Moving to Eugene, Oregon”